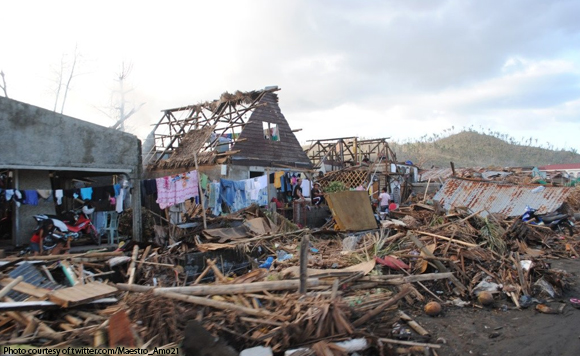 The people of “Nina”-battered Virac, Catanduanes was assured of massive government aid by President Rodrigo Duterte who arrived there Tuesday, December 27.

The President, addressing the people gathered in Barangay Francia, said he came to bring much-needed help in the aftermath of the tyhoon which struck them last December 25.

The President said members of his Cabinet came here to make an assessment and report when they hold a meeting in Malacanang what needs to be done to help the typhoon-affected people of Catanduanes.

The President affirmed his support for the townsfolk, in restoring what typhoon “Nina” had taken from them.

“We have money, I have my social fund and we will make the assessment how much we will be extending help, you will know that before New Year,” he added.

“What can I assure you, based on money that we have, we will make the restoration, giving the assistance before the New Year, because I know, it is important to all of you,” he added.

The President stressed government aid will be given as soon as possible, and damaged schools will be rebuilt immediately.

Based on the partial assessment report for the province of Catanduanes, typhoon damage to agriculture reached P134,335,393.10.

Typhoon “Nina” first made landfall in Catanduanes at 6:30 p.m. Christmas Day with gustiness of 235 kilometers (146 miles) per hour, placing the province under tropical cyclone warning signal (TCWS) No. 4.