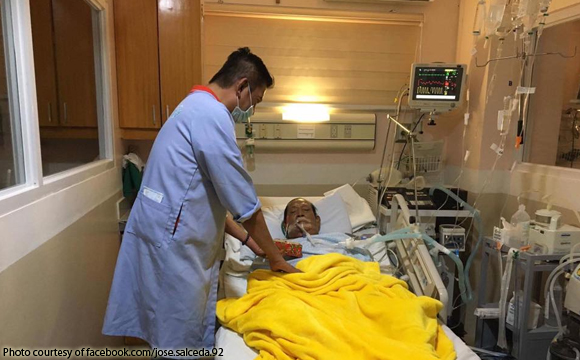 Christmas this year has been full of trials for Albay 2nd district Rep. Joey Salceda, who is worrying over his hospitalized father even as a powerful typhoon continues to batter his province.

But that doesn’t mean the politiko can’t crack a joke in the name of the holiday spirit.

Over on his Facebook, Salceda released a “statement” from Santa Claus regarding typhoon “Nina”, which unleashed its mist over Bicol on Christmas Day.

“Santa Claus vehemently denies Nina is one of his reindeers or one of his presents,” Salceda wrote. Nina (international name: Nock-Ten) packs winds of up to 215 kilometers per hour, according to PAGASA.

The post was comic relief that Salceda probably needed his himself, given that his ailing father, former Polangui, Albay Mayor Jesus Salceda Sr., has been confined at Aquino’s University Hospital for days now.

Incidentally, the older Salceda also celebrated his birthday on December 25. The congressman also shared on FB how his dad’s condition has been improving.

Albay is under tropical cyclone warning signal no.3.