Chilling effect: Journos fear they may be next after Que 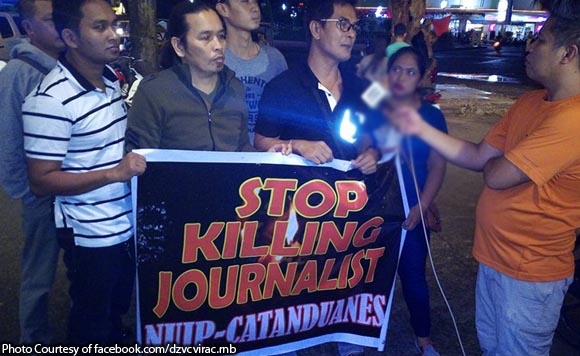 The apparent murder of Catanduanes News Now publisher Larry Que is sending shivers down the spine of local journalists, particularly those who have been covering the recent discovery of a “mega-sized” drug laboratory in Virac town.

Que, a locally-famous businessman who ran for town mayor in the May polls, had slammed authorities in his column for their “negligence” over the drug lab, which was uncovered last November 26.

Located near the main highway, the drug lab has been described as the largest ever in the country. To some, it earned Catanduanes the unofficial tag of “drug capital’ in the Bicol region.

Now, there’s fear that the violence against journalists won’t stop with the ambush on Que, which was carried out in broad daylight.

The National Union of Journalists of the Philippines (NUJP)-Catanduanes reported that, aside from Que’s murder, at least one other journalist, broadcaster Jinky Tabor, who acted as a witness to the raid on the laboratory, has also received threats. Tabor also writes for the Manila Bulletin.

Others like Tabor are reportedly wary that they may be the next targets as several powerful and influential people are allegedly responsible for the drug lab, which began operations last March.

Police said that the facility can churn out 10 tons of “shabu” per month.