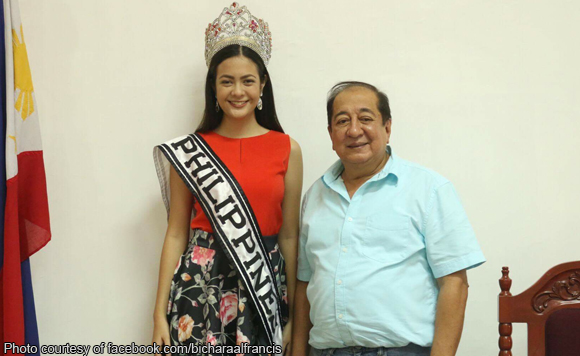 Here’s another Bicolana to rally behind in the glitzy world of beauty pageants.

Christine Arnedo of Albay been selected by the Binibining Unibersidad Organization as the Philippine representative in the World Miss University 2016 pageant.

She will fly to Seoul, South Korea on Sunday, November 27 for the pre-pageant and to Beijing, China on December 10.

The pageant gala will take place on December 15, according to Vice Governor Harold Ong Imperial.

“Mabuhay! Good luck to Ms. Unibersidad Christine Arnedo from Bicol University. The province of Albay is behind her as she will represent the Philippines in an international competition in China and Korea on December 2016,” said Governor Al Francis Bichara on his Facebook.

Bichara posted pictures of Arnedo’s recent courtesy call to the Office of the Governor and the Sangguniang Panlalawigan to go with his message.

Bicol and the rest of the country is also holding its collective breath for Catriona Gray, the Philippines’ entrant in the Miss World 2016 beauty pageant. Gray is also an Albay native.