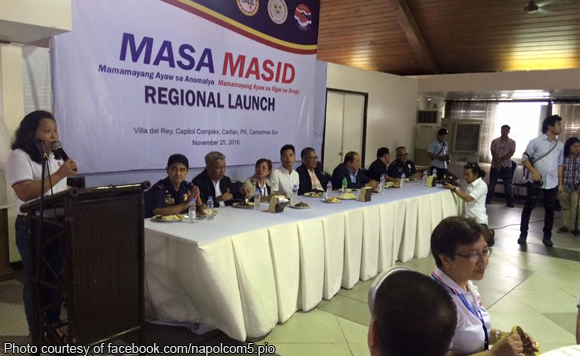 The Department of Interior and Local Government (DILG) on Friday, November 25 launched its flagship, community-based anti-illegal drug drive in the province of Camarines Sur.

Leading the program rites was no less than DILG Secretary Mike Sueno.

A community-based program for the prevention of corruption, illegal drugs and criminality in barangays, MASA MASID intends to unite different organizations in creating safer and drug-free communities in the country.

The program has four main thrusts: information and education campaign in communities for government programs against corruption, illegal drugs and criminality; creation of a reporting mechanism on illegal drugs-related activities; formulation of community-based rehabilitation programs; and revive the spirit of volunteerism by creating a volunteer-friendly atmosphere for organizations that wishes to be partners for change.