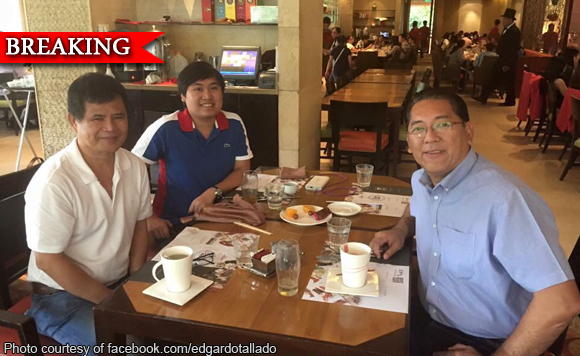 Former Camarines Norte governor Edgar Tallado on Sunday (November 20) posted a photo on Facebook that for now dispels any notion of a “breakup” between him and his ally, current governor Jonah Pimentel.

The photo shows him, Pimentel and the former’s son Alvin all smiles and having a meal together.

More telling though was the caption supplied by Tallado, which read “United we stand #higitsasalitagawa #onecamnorte”.

Earlier this month, Pimentel was sworn in as the new top executive of Camarines Norte following Tallado’s dismissal from his post, which had been ordered by the Office of Ombudsman.

The penalty includes perpetual disqualification from holding any government post. Apparently this is where Alvin Tallado comes in.

According to a Bicol Standard report, Alvin is being groomed as gubernatorial candidate in the 2019 elections. Meanwhile, Pimentel will run for a congressional seat.

Earlier, Pimentel claimed that he never intended to become governor and that he’ll just continue the programs that the elder Tallado began.