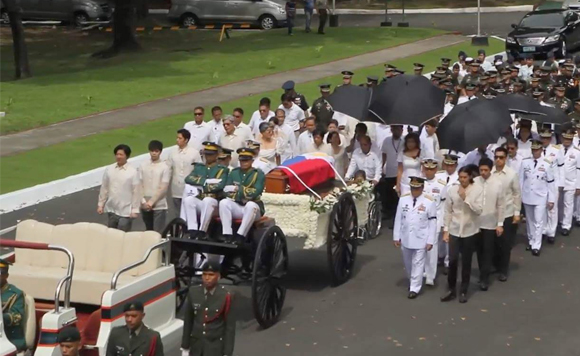 The so-called “legitimate” Minority bloc at the House of Representatives (HOR) has expressed its intention of digging out late dictator Ferdinand Marcos’s supposed remains at the Libingan ng mga Bayani (LNMB) the same day that it was hastily buried there.

“We will file a motion to exhume and motion for contempt. This is a deceptive, devious, underhand, abusive tactic that they did before and are still doing until now,” said Albay Rep. Edcel Lagman, the most vocal member of the bloc.

Lagman was among those up in arms when members of the Marcos family buried their patriarch at the Hero’s Cemetery at noon Friday (November 18).

For Lagman, the burial order was not yet final and executory despite the Supreme Court’s (SC) junking of their petitions last week.

“We still have until November 28 to file a motion for reconsideration (MR). Our MR is yet to be resolved, we have 15 days to appeal after we received the ruling.

“The respondents cannot take any action pending the resolution of the case. The decision is not yet final. This is premature,” stressed Lagman.