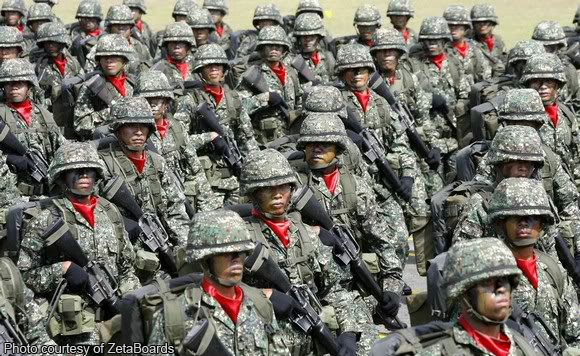 The “militarization” of barangays in Masbate is beginning to take its toll on Municipal Governments there.

Over in Cawayan town, local officials are faced with the prospect of trying to keep angry residents appeased even as members of the Armed Forces of the Philippines (AFP) showed intentions of staying indefinitely at their municipality.

In fact, at the Municpal Hall, townsfolk are now on their fourth day of camp out Friday (November 18). They are demanding the AFP troops to go back to their barracks.

The camp out of the locals began last Tuesday, November 15 along with a dialogue with officials led by Vice Mayor Bibot Condor.

Condor lamented that they cannot decide to remove the deployed AFP troops on their own, since these armies told them that their stay in Cawayan is based on a “national directive”.

As for the distraught residents, they have been given conditional cash and relief according to the Masbate People’s Organization (MAPO).

A Bicol Today report said the AFP operatives are now staying in at a gymnasium near Cawayan Municipal Hall.

Condor decided to transfer the protesters in a sport complex away from the gymnasium to avoid commotion.

Vince Casilihan of Bayan Bicol echoed the locals’ opposition to the continued military presence in their area.

“Oplan Bayanihan ever since is just a front of AFP troops to maneuver themselves in harassing the people, causing fear and human rights violations in the region. Let us not be deceived with this counter-insurgency program of the state. Imprints of martial law will continue if we, Bicolanos, will not take stand to demand for justice against military operations,” he said.