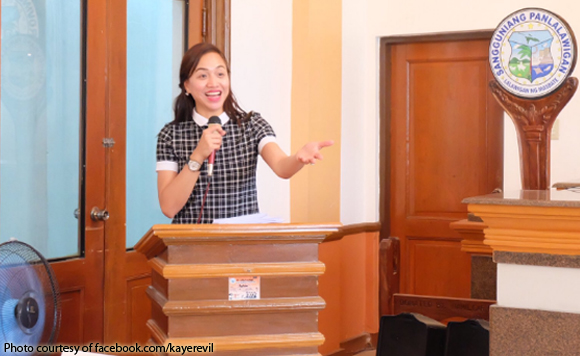 Masbate Vice Governor Kaye Revil has put to rest speculations regarding the blaze Tuesday (November 15) at the Masbate Provincial Police Office (PPO), which according to reports was rocked by “explosions”.

Revil, on a Facebook post, said she set up a meeting with Police Director (PD) Senior Superintendent Jerry Bearis to get clarification about the incident.

“The explosions heard according to the PD are possibly explosives buried in the area since many years back. He suspects that the fire is caused by short circuit,” the lady politiko said.

But it was the series of blasts that was unnerving to some residents.

“My own office’s glass doors [at the Provincial Capitol] have been broken, along with some of the Sangguniang Panlalawigan windows. I know that we all want to be clarified & informed of what really happened,” Revil wrote.

Like what she subsequently learned and shared to her constituents, there was nothing untoward about the incident.

“The BFP (Bureau of Fire Protection) is the agency in charged of the investigation of the actual cause of the same & according to Officer Lavadia, they have already created a special 10 personnel Provincial Task Force PPO (Police Provincial Office) to conduct the investigation,” she said.