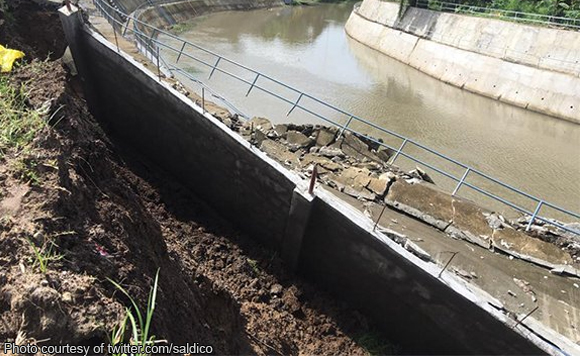 0 898
Share
Want more POLITIKO News? Get the latest newsfeed here. We publish dozens and dozens of politics-only news stories every hour. Click here to get to know more about your politiko - from trivial to crucial. it's our commitment to tell their stories. We follow your favorite POLITIKO like they are rockstars. If you are the politiko, always remember, your side is always our story. Read more. Find out more. Get the latest news here before it spreads on social media. Follow and bookmark this link. https://goo.gl/SvY8Kr

Such is the burning question right now after it was reported that substandard construction materials may have been used on the river barricade, particularly its railings.

According to a Bicol Standard article Tuesday (November 8), the Department of Public Works and Highways (DPWH) district office discovered that the G.I. pipes used in the infrastructure project were not up to the required specifications.

Due to this “defect”, District Head Engineer Rebecca Roces said her office decided not to approve the collection of NFH Construction, the winning project contractor.

Based on the report, the G.I. pipes that were recommended for use as railings in the revetment were much thicker than the ones used in the finished project.

The P50-million revetment was inaugurated only last September.

The DPWH aired its concern over the railings just days after a 55-meter portion of the barricade–that’s almost 200 feet–collapsed. A long crack has also appeared on it.

The revetment is 5,670 meters long and runs along Barangays Dayangdang to Penafrancia.