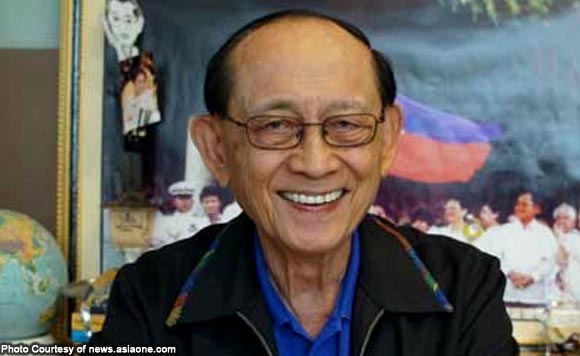 This House politiko has “balls” for insinuating that former president Fidel V. Ramos (FVR) is both irrational and irresponsible for speaking out against the administration.

Albay 2nd district Rep. Joey Salceda took to Facebook to comment on Ramos’s rather scathing statements on how President Rodrigo Duterte is basically screwing up his role as Chief Executive.

In the article Salceda posted, Ramos linked the Philippines to a leaking ship that’s in danger of sinking especially if its captain, Duterte, doesn’t get its act together.

“Because we are all together onboard Ship Pilipinas – which is still leaky and slow-moving, because of internal strife and disunity, we all need to pull an oar or plug a leak (instead of adding more holes),” FVR said.

Salceda disagrees with this assessment and points to Duterte’s recent four-day swing in China.

“When your President gets accompanied by 522 business delegation and returns home with $24bn funds – $15bn for business and $9bn in loan commitment, it is neither rational nor responsbible to call your country sinking,” the congressman wrote on his Facebook post.

Ramos, who is Duterte’s special envoy to China, skipped the state visit. He began criticizing Duterte’s performance as president earlier this month when the latter marked his 100th day in office.

Salceda is a former member of the Liberal Party (LP), the erstwhile ruling political faction. Just before the May presidential elections, he pulled his support for LP bet Mar Roxas in favor of Senator Grace Poe.

Duterte went on to soundly defeat both candidates. Salceda is now part of the Majority in Congress. #