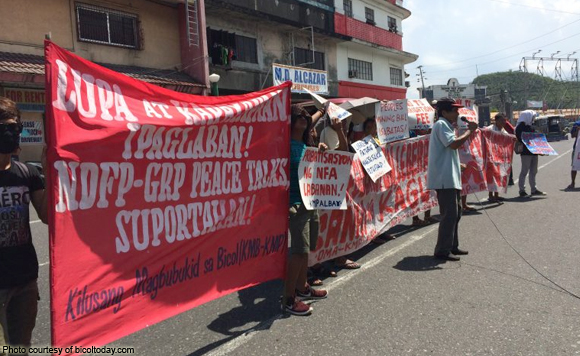 Bicol-based peasant groups reminded government agencies in the region to comply with the “progressive steps” set by President Rodrigo Duterte to serve the farmers and the poor.

“Peasants remain landless while the vast lands of the country are under control of landlords, comprador bourgeoise and foreign capitalists,” according to KMB spokesman Jonathan Moico, adding nine out of 10 farmers are landless.

He added widespread poverty and hunger are being experienced by the masses, while the neo-liberal economic policies of the World Trade Organization continue driving agriculture.

They held protests in front of the offices of the Departments of Agriculture, Agrarian Reform, Environment and Natural Resources, National Irrigation Administration, Philippine Coconut Authority, and Bureau of Fisheries and Aquatic Resources.

The groups also said government has yet to implement Duterte’s policy to give back coco levy funds to small coconut farmers and eliminate irrigation fees.