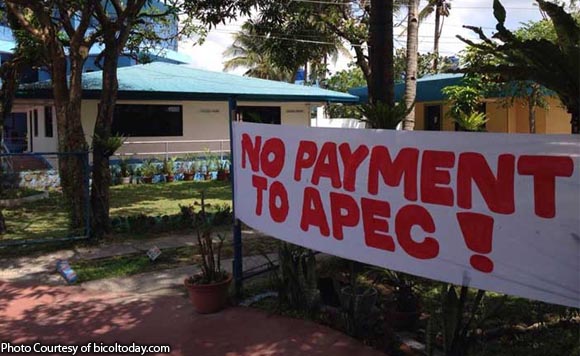 Residents in Albay may face a dark Christmas, no thanks to unsettled bills of the Albay Electric Cooperative Inc. amounting to a whopping P5.6 billion.

Failure to settle bills would mean disconnection from the National Grid Corp. of the Philippines in December, the report said.

“We call on our consumers, to pay their current bills,” APEC spokesperson Patricia Gutierrez said.

Otherwise, she said “the entire province of Albay might experience a total blackout” as early as Dec. 22.

Gutierrez said there are more than 155,000 consumers not paying on time.

As early as 2014, local politicians had promised ALECO would be under private management, and its debts would end.

Gutierrez said consumers may avail of a flexible payment scheme where they can pay in three- to six-month installment schemes.

Consumers have 10 days to settle accounts after getting a disconnection notice, and another 48 hours to go to APEC Centers to clear everything.