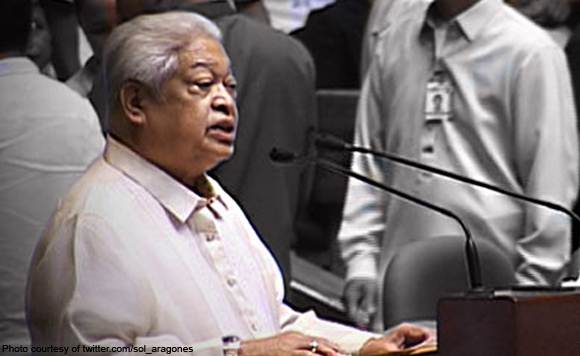 Albay 1st district Rep. Edcel Lagman may appreciate President Rodrigo Duterte for finally signing the Implementing Rules and Regulations (IRR) of the Centenarians Act of 2016–his pet measure since the 15th Congress.

However, this didn’t stop the veteran solon from launching a subtle tirade toward Duterte over the irony of the situation.

“The implementation of the Centenarians Act is a welcome development as it pays homage to life and longevity even as a growing culture of violence and death besets the country,” Lagman said in a statement Monday, September 26.

The House politiko was obviously referring to the spate of summary executions in the country allegedly done in the name of Duterte’s aggressive anti-illegal drug campaign. Lagman’s group in Congress, the “legitimate” Minority bloc, has been very vocal about their reservations on the killing spree.

Duterte is scheduled to lead the signing of the IRR of Republic Act (RA) no.10868(Centenarians Act of 2016) Monday at the Rizal Hall of Malacañang.

Under the law, every Filipino citizen who celebrates his or her 100th birthday shall receive a cash gift of P100,000 from the National Government in addition to the cash incentive from the city or municipality where he or she resides.

Lagman said that the Act “also honors aging senior citizens who have served their families, communities and country for the longest period of time”.

Lagman first filed the bill in the 15th Congress. It was pursued anew by his son, former Albay Rep. Grex Lagman, in the 16th Congress wherein it was enacted.