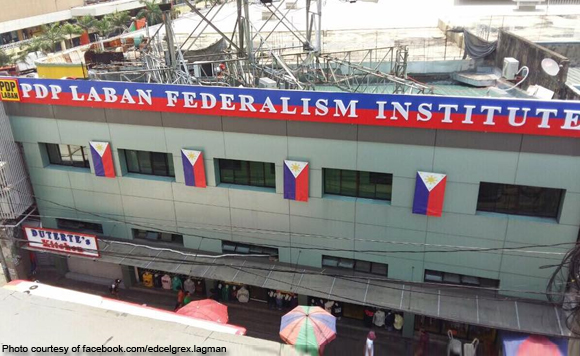 Call it a case of federalism-flavored false advertisement.

Former Albay 1st district Rep. Grex Lagman masked his disappointment with sarcasm after paying a visit to the so-called “Federalism Institute” along EDSA earlier this month.

“Just visited the ‘Federalism Institute’ of PDP-Laban along EDSA. Tell me why i’m not surprised to see that it’s actually an empty shell of an institute. What i saw were stalls selling ukay-ukay apparel,” Lagman wrote on this Facebook post.

PDP-Laban is President Rodrigo Duterte’s political party. Duterte, as everyone knows, is a big time advocate of federalism.

Lagman apparently wanted to learn more about the argument favoring the switch to a federal type of government from the current unitary. If only he found an institute and not this flea market.

“I was actually excited to meet the leading lights of federalism in the academe and/or committed researchers who advocate this shift. I was ready with my questions bearing on Senate Joint Resolution No. 10.

“I talked to a street vendor and the woman informed me that the same has never been in operation,” he further wrote.

As such, the former politiko reckoned that the establishment makes Duterte look bad, especially with the way his face decorates the place.

“It does not look good for P-Duts that his posters adorn the hollow structure. There’s even a “Duterte’s Kitchen” which is also closed. Wow,” Lagman said.