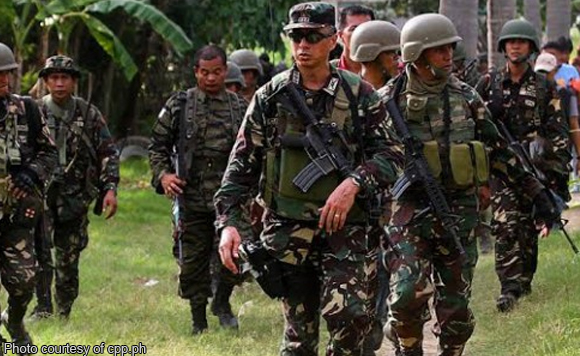 0 535
Share
Want more POLITIKO News? Get the latest newsfeed here. We publish dozens and dozens of politics-only news stories every hour. Click here to get to know more about your politiko - from trivial to crucial. it's our commitment to tell their stories. We follow your favorite POLITIKO like they are rockstars. If you are the politiko, always remember, your side is always our story. Read more. Find out more. Get the latest news here before it spreads on social media. Follow and bookmark this link. https://goo.gl/SvY8Kr

Despite an indefinite ceasefire to facilitate peace talks, the military continues to conduct offensive operations in Sorsogon, the New People’s Army claimed.

“They remained in these area until the present. Meanwhile, they again conducted operations in Barangay Calateo in the municipality of Juban since the morning September 15, 2016,” Guerrero said.

He said soldiers had maintained their presence in Gubat, including in Barangays Sangat, Cabigaan and Tiris since Sept. 13.

Nancy Sales, a local resident, claimed the military would leave then return.