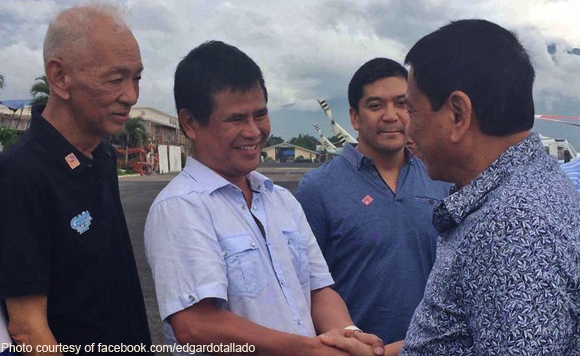 0 569
Share
Want more POLITIKO News? Get the latest newsfeed here. We publish dozens and dozens of politics-only news stories every hour. Click here to get to know more about your politiko - from trivial to crucial. it's our commitment to tell their stories. We follow your favorite POLITIKO like they are rockstars. If you are the politiko, always remember, your side is always our story. Read more. Find out more. Get the latest news here before it spreads on social media. Follow and bookmark this link. https://goo.gl/SvY8Kr

The Office of the Ombudsman’s suspension order against Camarines Norte Governor Edgardo Tallado has finally been served at the provincial capitol.

At that time, Tallado was at Pili airport for the arrival ceremonies of President Rodrigo Duterte.

It can be recalled that a six-month suspension was slapped against the Bicolano politiko for disgraceful and immoral conduct over a sex tape with his mistress. The video had earlier become viral, prompting an local employee to file charges against him.

The Ombudsman issued the suspension on August 8.

Tallado had earlier said that he would respect the Ombudsman’s decision. However, he did not discount the execution of legal remedies on his part, if he would he given the opportunity.

Mata said the governor will release an official statement soon.