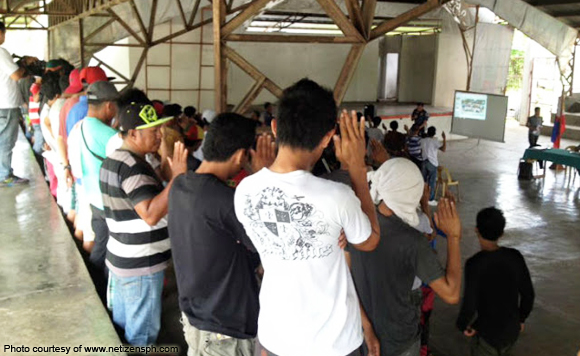 AKO-Bicol party-list Rep. Rodel Batocabe has filed a bill that spells out what the government should do amid the mass surrender of drug users and pushers under the Duterte administration’s aggressive anti-drug campaign.

“Our authorities are at a loss as to what course of action to take with our 600,000 and counting surrenderees and we cannot just compel them to submit themselves to rehab without a court order”, said the politiko.

“The police just send them home so some of them go back to a life of selling drugs, some engage in sports, and some even do zumba, but the message is clear: there is a vacuum in the law with regard to the procedures to be taken in case a drug user or a pusher voluntarily submits himself to the authorities,” he noted.

Under Sec. 15 of the Comprehensive Dangerous Drugs Act, a drug user or pusher will be subject to a penalty of mandatory six months of rehabilitation when he is caught. A second offense will merit the drug user or pusher the penalties of imprisonment from six years and one day to 12 years and a fine ranging from P50,000 to P200,000.

The law, however, does not provide for guidelines, steps, and penalties in the event a drug user or pusher voluntarily surrenders.

The amendments AKO Bicol Party-list seeks to pass into law will mandate six months of drug rehabilitation for the drug user upon surrender without counting against the supposed two offenses as dictated by law.

For the drug dealer or pusher, the amendments will direct the drug pusher to be summarily charged in court, have his sentence suspended, and be placed under the custody of a DOH-accredited physician.

If he is found not to be a drug dependent, he will be released but placed on a watch-list, a fact which will be taken as an aggravating circumstance should he be found to be dealing drugs again.

“We have to take into account their initiative in submitting to the State’s program to cleanse themselves of the evils of drug use and abuse…by showing their willingness to be a partner for change, the State will hold their hand toward a cleaner and more fulfilling life,” Batocabe said.