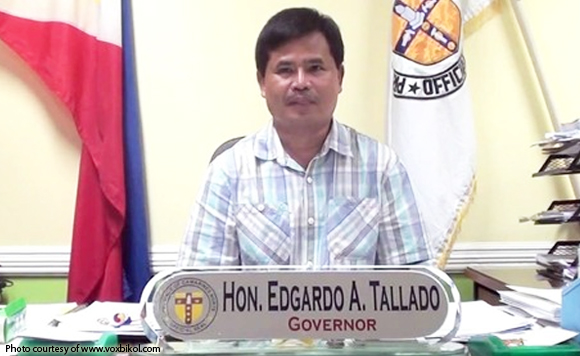 Camarines Norte Governor Edgardo Tallado has been suspended by the Office of the Ombudsman in connection with the sex scandal that he figured in.

In its decision, the Ombudsman slapped Tallado with a six-month suspension after finding him administratively liable for “disgraceful and immoral conduct”.

This conduct involved the photos and videos of him engaged in apparent sexual acts with his alleged mistress.

Meanwhile, the Ombudsman has instructed the Department of Interior and Local Government (DILG) to implement Tallado’s suspension upon receipt of its order.

The suspension stemmed from a complaint filed by Jonel Banal, who accused the politko of having an extramarital affair.

Banal claimed that the sex scandal has caused embarassment and humilition to the people of the province, especially its women.

It can be recalled that Tallado’s wife, Josie, sought protection in October 2014 due to threats to her life after discovering her husband’s affair.