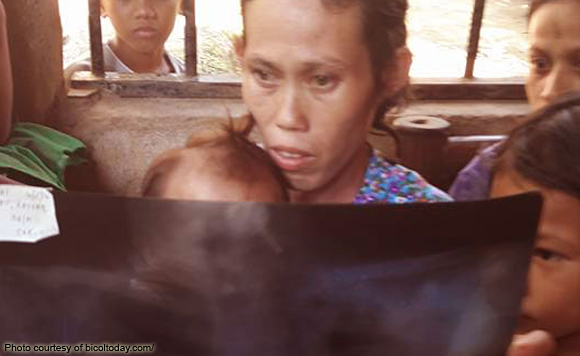 In a twist of irony, residents of a gold-rich area in Aroroy town in Masbate face the threat of hunger and are blaming a local mining firm for this, a Bicol-based news site reported.

One resident, Rowena Zolina, 38, said she started losing weight after experiencing fever and cough, and she suspects this is aggravated by fumes from mine-blasting.

Zolina also said her sari-sari store has been bankrupt, the report said.

Aileen Flores, 39, added cough and asthma are common among children and women in the area. She added she does not know where to get food, unlike before when gold panning was still allowed in their barangay.

Ready-to-wear trader Ando de la Cruz, most of whose customers are farmers and gold panners, said he has similarly fallen on hard times.

Dela Cruz is among the concerned citizens speaking up against environment pollution and degradation.

He also said the money given by the mining firm for social development may be going to the wrong hands, with barangay officials getting P12,000 to P15,000 a month.

Meanwhile, farmer Alfredo Cabatingan, 65, claimed he is a victim of abuse from the private guards of the mining firm.

He said he was detained for 21 days without charges, and is waiting for the action taken by the Commission on Human Rights regional office in Legazpi City.

Cabatingan said a bulldozer of the mining firm destroyed his banana plantation supposedly to cover the mining pits dug by panners in Capsay area.

He was compensated with P20 for each damaged plant, but noted the Department of Agriculture assessed a compensation of P1,500 for each uprooted plant.