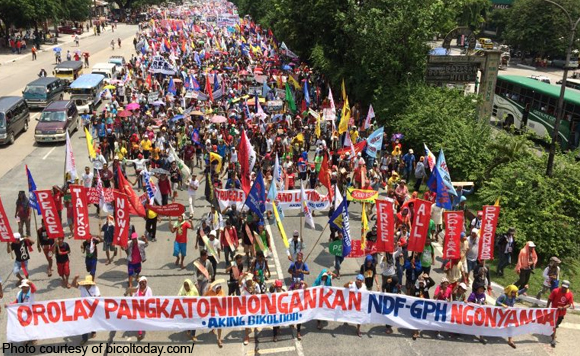 They may have been friendly to President Rodrigo Duterte when they marched to the Batasan Complex during his State of the Nation Address, but Bicol-based leftist groups are not quite getting chummy with him, at least for now.

“We are aware of the fact that not all people surrounding President Duterte are for genuine change,” said Dan Balucio of Bayan-Bicol (http://bicoltoday.com/2016/07/28/progressives-remind-bicolanos-to-strengthen-mass-movement/).

He said such groups that are not for genuine change include the United States and the World Bank and International Monetary Fund.

“They are only here, preparing and looking for opportunities to delay the changes we wanted,” he said.

Also, he said they cannot rely on Duterte alone for social change.

Instead, he said change can be brought about with “ongoing sustained unity and collective struggle for people’s agenda.”

“We cannot just rely on one person, to President Duterte, the events of social change. It will be achieved through the ongoing sustained unity and collective struggle for people’s agenda,” Balucio said.

Meanwhile, Balucio said the roots of the armed conflict will be resolved through peace talks.