SONA marchers from south arrive at UP 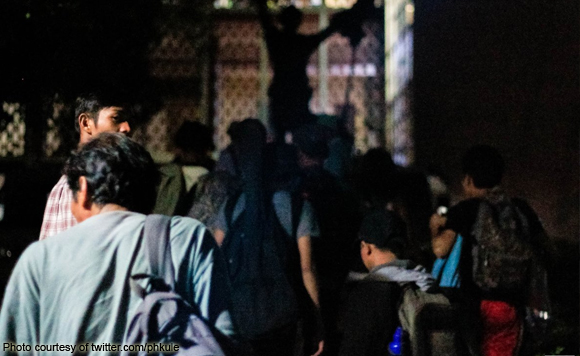 Some 3,000 Bicol-based participants to a march to the Batasan Complex for President Rodrigo Duterte’s first State of the Nation Address (SONA) are now in Metro Manila.

The delegates arrived at the University of the Philippines’ Diliman campus in Quezon City aboard buses, UP student publication The Philippine Collegian said.

In photos posted on its social media accounts, The Collegian said the “Manilakbayan” delegates arrived Saturday night at UP Diliman

EARLIER: More than 3,000 Manilakbayan delegates for the People’s SONA on July 25 arrived in UP Diliman.

Also, it indicated the delegates are to stay at Vinzons Hall for the weekend

EARLIER: Delegates from the Manilakbayan for the People’s SONA arrived at Vinzons Hall to stay for the weekend. pic.twitter.com/zpUxdbyCZ8

On Sunday, they are to take part in a morning exercise and jogging.

Militants are to march to the Batasan Complex on Monday for Duterte’s first SONA.

But this time, umbrella group Bagong Alyansang Makabayan said it is to march not in protest but in a call for peace.

Also, Bayan said it is preparing not an effigy but a six-panel mural entitled “Portraits of Peace” marking its “People’s Agenda for Change.” From Effigy to Mural: Art for Change