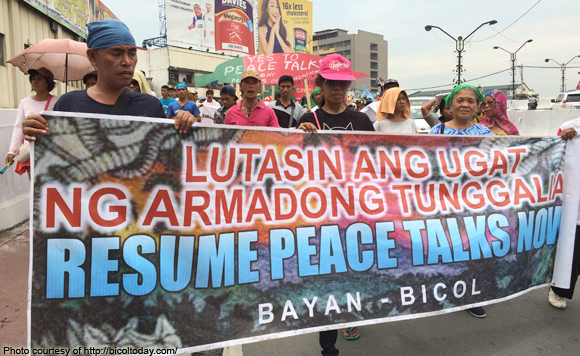 Some 5,000 militants from Bicol will join a march to the Batasan complex in Quezon City on July 25 for President Rodrigo Duterte’s first State of the Nation Address (SONA).

The militants said they will relay their agenda to Duterte, including their support for the resumption of peace talks with communist rebels, Bicol Today reported.

Peace talks between the government and National Democratic Front could take place after the SONA, as early as July 27 to August 2, the report said.

But the report also said the militants will also demand the release of all political prisoners, including 33 in Bicol (http://bicoltoday.com/2016/07/18/lakbayan-militants-in-bicol-will-bring-peoples-agenda-to-sona/).

Most of the 33 political prisoners in Bicol were accused of “fictitious common crimes,” according to militant group Karapatan–Bicol.

On the other hand, Karapatan Bicol’s Nida Barcenas said they will also demand the expulsion of the military in rural communities and a stop to military operations against civilians.

Meanwhile, the Bagong Alyansang Makabayan will bring up the broad framework of the People’s Agenda for Change in Duterte’s first SONA.

The demands for Duterte include:

1. Immediate release of 33 political prisoners in Bicol (18 Sorsogon, 9 Camarines Norte, Camarines Sur 4, 1 Albay, Catanduanes 1) and dismiss the case of On Bail At Large and that charged for political reasons.

3. Actively mobilize the DILG and DOJ-NBI-CIDG to file cases against the perpetrators of the murder of Tay Todoy, Mancera Family, Bico Family and others.
4. Implement the International Humanitarian Law (IHL) for the immediate expel of the military camps in public areas (City Halls, Day Care Centers, Chapels, and other facilities or structures in public places).

5. Remove the military detachments at or close to communities, schools or any other crowded places.

6. Remove Lina Sarmiento (PNP) as Chairperson of HRVCB (Human Rights Victims Claims Board)
7. Expedite the compensation to claimants, get more staff that will process the 75,000 applications received by the HRVCB, tap the Karapatan, SELDA, HUSTISYA and others that can help out.

Mid-Term:
1. Investigate all complaints that were submitted to the JMC (Joint Monitoring Committee)
2. Include in Basic Education Curriculum the Human Rights and the histories of Martial Law, it is already stated in RA10368
3. Disband the investment defense force and intelligence fund
4. Stop giving directives to AFP for security of mining sites

Economic issues
1st 100 days:
1. No to Contractualization
Several companies in Bicol with widespread contractualization:
A) Palanog Cement industry in Albay
B) Peter Paul corp. Sorsogon (coconut juice factory)
C) APEC in Legazpi City, Albay
D) Primex corp. in Lidong, Albay
E) LCC and Gaisano in Albay
F) Biggs in Camsur
G) Sunwest tone high security agency in Albay with 50 security in case
2. Junk Joint Administrative Order (JAO) – Memo Circular # 2015- 01- JAO
3. No to Jeepney Phase – out and Shepherd’s Badge Program
4. Legalize the use of motorcycles
5. Distribute Coco Levy Fund to Coco farmers and involve representatives of small farmers in the planning and implementation of programs in the coconut industry.
6. Free Irrigation and stop the collection of NIA irrigation service fee (ISF)
7. Stop land use conversion
8. Change the system of purchasing grain of rice. It cannot be selective to those who sells, whether or not members of the cooperative they should buy a few sacks of rice. Raise the purchase price of grain and lower the price of rice at affordable price. Assign the regular price of palay whether harvest season or not. Build buying station or satellite station of NFA near rice fields. Punish the dishonest traders or businessmen who frauds (imprisonment and or pay higher fine)
9. Oppose the phase-out of tramps in Tabaco City, Albay
10. Oppose and stop the Guicadale project in Albay
Mid-term:
1. Enact the Genuine Agrarian Reform Bill (GARB)
2. Investigate and review the seized land to farmers of landlords and foreign corporations
A) Stop the repeated charging of landlords in connivance with the bank (even after the CARP – example: Hacienda Bulaong)
B) Stop retrieval of land with CLT, EP and CLOA and its cancellation (Hacienda Pua, Almeda)
C) Share 1 hectare to farmers of Beringer, Sorsogon.
3. Junk Mining Act of 1995, and moratorium on all mining operations and exploration
– examples: Rapurapu Lafayette mining in Albay, mining in Balocawe, Matnog, Filminera mining in Masbate covering municipalities of Milagros, Mandaon, Balod, Mobo and Uson. Investigate the Energy Development Corporation and Exploration in the Gubat, Sorsogon. Stop the Quarrying on Calabangga, Libmanan, Baao, Pili, Camarines Sur and Camalig, Albay.
4. Junk the fisheries code of 1998
– Stop the commercial fishing, illegal fishing and using trawl, dynamite fishing, and the use of cyanide
5. Remove the high cost of payment to small fishermen stated in Municipal Zoning Ordinance
– the high tax, registration fee (price depending on use) Penalty for using unregistered
6. Stop the implementation of municipal zoning ordinance – Breaking 15km municipal water
7. Junk the marine ordinance (zone 40 meters)
8. Disband the rice cartel
9. Increase the price of copra and Punish comprador who twists weighting scales
10. Provide appropriate support in agricultural production including free seeds, machinery and skills.
11. Promote and implement genuine organic agri program – (organic agri act of 2011 has no fangs).
12. Recover Tiwi geothermal and Bacman from aboitiz and lopez

1st 100 days:
1. Pass the FOI
2. Creation of anti-crime and corruption task force when FOI has been passed
3. All out war declaration against drugs and corruption
4. Review and expose fake land titles
Mid-term:
1. Expose the Ako Bicol openly as big-time contractor
2. Standardization of stipends and benefits of barangay officials