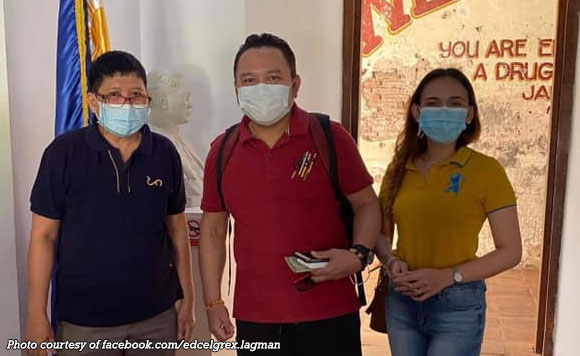 0 238
Share
Want more POLITIKO News? Get the latest newsfeed here. We publish dozens and dozens of politics-only news stories every hour. Click here to get to know more about your politiko - from trivial to crucial. it's our commitment to tell their stories. We follow your favorite POLITIKO like they are rockstars. If you are the politiko, always remember, your side is always our story. Read more. Find out more. Get the latest news here before it spreads on social media. Follow and bookmark this link. https://goo.gl/SvY8Kr

Albay Vice Gov. Grex Lagman had a productive visit to the National Museum of the Philippines Ilocos Complex in Ilocos Sur.

In a Facebook post, Lagman said that not only did he get to marvel at paintings, he learned very interesting tidbits, especially about the Basi Revolt of 1807.

It happened after the Spanish Governor-General imposed a monopoly on Basi wine, which was a major part of Ilocanos’ lives.

The Ilocanos were outraged when the monopoly was arbitrarily awarded to Pangasinan to maximize profits for the Spanish Crown, and this led to a revolt against the Spanish Governor of Ilocos province, he said.

He shared these information so that people would appreciate and learn from the past, he said.

Now we know just how much Basi wine means to the Ilocanos!

“Visited the National Museum of the Philippines Ilocos Complex this afternoon in Vigan, Ilocos Sur.

Happy to have been guided by Ms. Malot Ibañez Ingel. She was very knowledgeable about the 14 paintings of Esteban Pichay Villanueva about the Basi Revolt of 1807. I recall Malot narrating how the Spanish Governor-General imposed a monopoly on Basi wine which is central to the Iloko way of life as we looked at the beautiful paintings. She also added that the Ilokos and Itnegs were forced to abandon home- and community-based production of Basi when the monopoly was unjustly and arbitrarily awarded to Pangasinan to maximize profits for the Spanish Crown. Of course this sparked outrage among the Ilokos and Itnegs that culminated in this historic revolt against the Spanish Governor of Ilocos province.

Also saw some amazing paintings and memorabilia of the first Ilocano President of the Philippines, Elpidio Quirino (1948-1953) who was born in Vigan. I remember my late mom, who was born in 1944, telling me about President Quirino’s campaign jingle in his re-election bid in 1953. She was nine years old at that time and had personal knowledge of said campaign jingle having had heard it over the radio. She even sang the same to me and, as far as she could remember, the lyrics went like this: ‘Qurino my Quirino, Quirino my bambino…’ Btw, Quirino lost to Ramon Magsaysay. So i guess the campaign jingle didn’t work. Haha

Just historical tidbits that i hope would make us appreciate the past better and learn from it,” Lagman posted.