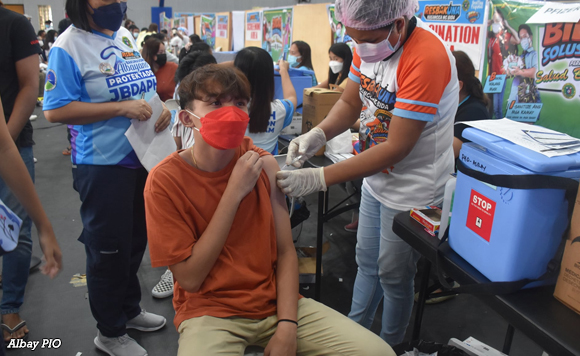 0 429
Share
Want more POLITIKO News? Get the latest newsfeed here. We publish dozens and dozens of politics-only news stories every hour. Click here to get to know more about your politiko - from trivial to crucial. it's our commitment to tell their stories. We follow your favorite POLITIKO like they are rockstars. If you are the politiko, always remember, your side is always our story. Read more. Find out more. Get the latest news here before it spreads on social media. Follow and bookmark this link. https://goo.gl/SvY8Kr

The Albay province is close to vaccinate 70% of it’s population as of December 6, the provincial health office reported.

The Provincial Health Board told the good news to Governor Al Francis C. Bichara in its meeting at the Governor’s Guesthouse presided by PGDH Officer-in-Charge, Dr. Estela Zenit.

In the said report, PHO Officer-in-Charge Dr. Estela Zenit told Bichara and the members of the Provincial Health Board that sixty-four (64%) of the total eligible population received COVID-19 jabs.

Legazpi City ranked the highest of the eligible population to have completed the vaccination program, Dr. Zenit said.

However, Dr. Zenit explained that the increase in the status of the percentage of the eligible population inoculated in Legazpi City included those who were vaccinated by the Provincial Government of Albay made possible through the Albay Provincial Health Office initiatives that were held almost consecutively at Albay Astrodome.

Dr. Zenit said in an interview that the problem in Rapu-Rapu is not of its being an island municipality, but, because of the lack of a suitable vaccination site, causing the delay and slowing down the conduct of the vaccination program despite the sufficiency of vaccine supply.