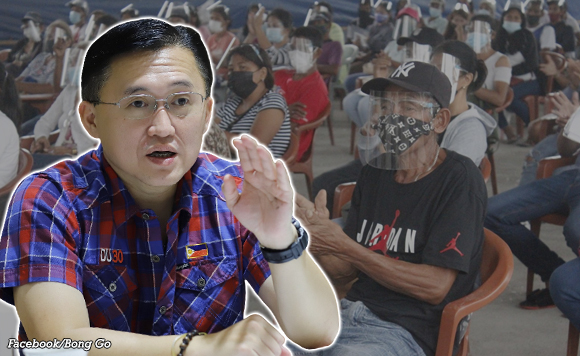 0 827
Share
Want more POLITIKO News? Get the latest newsfeed here. We publish dozens and dozens of politics-only news stories every hour. Click here to get to know more about your politiko - from trivial to crucial. it's our commitment to tell their stories. We follow your favorite POLITIKO like they are rockstars. If you are the politiko, always remember, your side is always our story. Read more. Find out more. Get the latest news here before it spreads on social media. Follow and bookmark this link. https://goo.gl/SvY8Kr

Senator Bong Go appealed to local partners to strengthen their safety and disaster response during and after calamities as his team organized a relief operation in Libon, Albay last Saturday.

In a video message, Go reiterated his call for the passage of Senate Bill No. 1228, otherwise known as the Mandatory Evacuation Center Act in 2019, which aims to establish an evacuation center in every province, city, and municipality.

He asked the authorities to provide necessary health guidelines to minimize the risk of spreading COVID-19 in the evacuation centers.

As part of the government’s efforts for vulnerable communities in crisis situations, a team from the Department of Social Welfare and Development provided financial assistance to the typhoon victims.

The senator then assured that his office is ready to help those with medical concerns and advised them to seek medical care at Bicol Regional Training Center in Legazpi City where there is a Malasakit Center available to assist in their medical expenses.

The center is a one-stop shop that brings together partnered agencies, including DSWD, Department of Health, Philippine Health Insurance Corporation, and Philippine Charity Sweepstakes Office. The Malasakit Centers program, which Go legislated in 2019, has assisted more than three million poor and indigent patients nationwide.