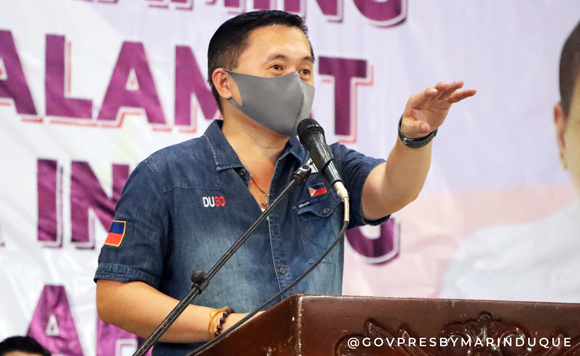 0 186
Share
Want more POLITIKO News? Get the latest newsfeed here. We publish dozens and dozens of politics-only news stories every hour. Click here to get to know more about your politiko - from trivial to crucial. it's our commitment to tell their stories. We follow your favorite POLITIKO like they are rockstars. If you are the politiko, always remember, your side is always our story. Read more. Find out more. Get the latest news here before it spreads on social media. Follow and bookmark this link. https://goo.gl/SvY8Kr

Senator Christopher “Bong” Go dropped by in Boac, Marinduque to personally provide assistance to 557 Typhoon Jolina victims as he appealed to his fellow public servants to continue working hand-in-hand in order to overcome the crisis as one nation.

The distribution activity was held at Marinduque State University Gymnasium where they handed out grocery packs, meals, masks, face shields, and vitamins to the beneficiaries while the Department of Health gave them health kits.

Go gave new pairs of shoes and bicycles to selected recipients, as well as computer tablets intended for education under the blended learning setup.

Go also appealed to the public to get vaccinated against COVID-19. He assured that once the country attains population protection leading to herd immunity, the government can consider relaxing more economic restrictions.

To further help them recover from the calamity and sustain their basic necessities, the Department of Social Welfare and Development gave financial assistance to the typhoon victims in a separate distribution.

Senator Go, who also serves as the Chair of Senate Committee on Health and Demography, urged the public to prioritize their health as he offered assistance to address their medical concerns.