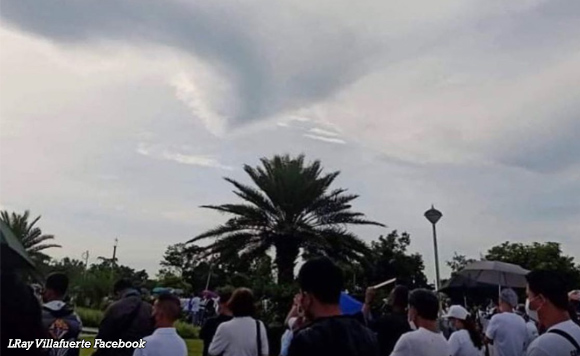 0 144
Share
Want more POLITIKO News? Get the latest newsfeed here. We publish dozens and dozens of politics-only news stories every hour. Click here to get to know more about your politiko - from trivial to crucial. it's our commitment to tell their stories. We follow your favorite POLITIKO like they are rockstars. If you are the politiko, always remember, your side is always our story. Read more. Find out more. Get the latest news here before it spreads on social media. Follow and bookmark this link. https://goo.gl/SvY8Kr

“Tignan nyo Po ang cloud formation this morning during the flag raising ceremony at the Capitol when they were honouring the memory of my father , LRV,” said Villafuerte.

According to the solon, this shows that his father Luis R. Villafuerte has descended to heaven.

“This only proves that my father is now high up in the heavens soaring high and watching over us . He was with us this morning celebrating with us during the flag ceremony,” he said.

“Soar High above LRV , your genuine love and generosity to our people will surely be missed but your legacy will surely be continued and Lived on,” he added.

He also thanked the Capitol employees for honoring LRV, who passed away last September 8.