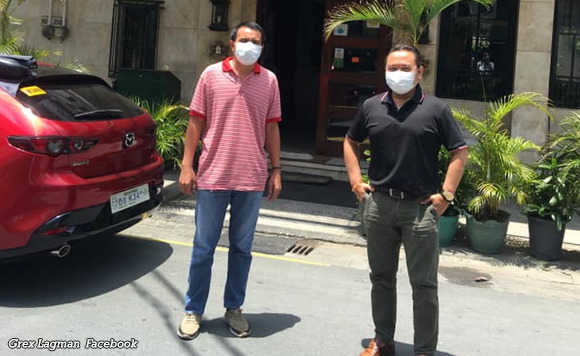 0 213
Share
Want more POLITIKO News? Get the latest newsfeed here. We publish dozens and dozens of politics-only news stories every hour. Click here to get to know more about your politiko - from trivial to crucial. it's our commitment to tell their stories. We follow your favorite POLITIKO like they are rockstars. If you are the politiko, always remember, your side is always our story. Read more. Find out more. Get the latest news here before it spreads on social media. Follow and bookmark this link. https://goo.gl/SvY8Kr

Albay Vice Gov. Grex Lagman got to visit his old college haunts during a trip to Manila.

In a Facebook post, Lagman said he felt lucky to have experienced the downtown vibe of Ermita and Malate in Manila, which was where his college was located.

He would not trade the “gritty, vibrant and even visceral vibe” of the University of the Philippines Manila campus for the serenity of the Diliman or Los Baños campuses, he said.

During his visit to the country’s capital, he drove around the Manila streets that used to be his stomping grounds and felt nostalgic.

He dropped by the Remedios Circle and the Adriatico Arms Hotel that his relatives usually stayed in after a flight from the United States.

The hotel is owned by a fellow Bicolano, former Albay Rep. Fernando Gonzalez.

Lagman said he went into the hotel during his Manila trip to enjoy a meal and chat with its staff.

The once vibrant place is now very quiet.

But he believes that we will still triumph over this pandemic.

Here’s hoping that his former haunts will soon be bursting with life!

“In college, i was very fortunate to have experienced for 4 years the inimitable downtown vibe of Ermita in Malate, Manila. The Diliman and Los Baños campuses may have offered more serene environments for study and research but i wouldn’t trade the gritty, vibrant and even visceral vibe the Manila campus had and still has. Today i passed by my alma mater, UP Manila, and drove around its ‘de facto campus’ of charming backstreets and dangerous alleys. I couldn’t help but feel nostalgic when i again saw its restaurants and bars a couple of which brought back memories of an almost-wasted youth… i finally hit Remedios Circle and thought of dropping by a boutique hotel which came to be at a time when there was still no word or term for the same. The hotel’s a medievally-named one called Adriatico Arms Hotel. It’s where my late grandpa and grandma and still-very-much-alive uncles and aunts (from my mother’s side of the family) sometimes checked in after a grueling 21-hour flight from Baltimore, Maryland mainly because of the relative comfort a 15-minute ride from the airport brings. About the hotel, it was only when we were colleagues in the 16th Congress (2013-2016) that i realized the same is owned by former 3D Albay Congressman Fernando Vallejo Gonzalez. To honor a beloved fellow Albayano, I happily went inside and ordered some of its fare. Here are some pics of Adriatico Arms Hotel with Don Fernando’s loyal employees my “tokayos” Ed the security guard and Graeco the supervisor. They say love always wins even in this pandemic world. Well, it must. Otherwise I don’t see how we can still feel alive when stared down by the deathlike vibe empty restaurants and bars offer because of this pandemic. Emotions are heightened in the backdrop of vivid memories especially when, once upon a time, these bars and restos were bustling and bursting with life,” Lagman posted.