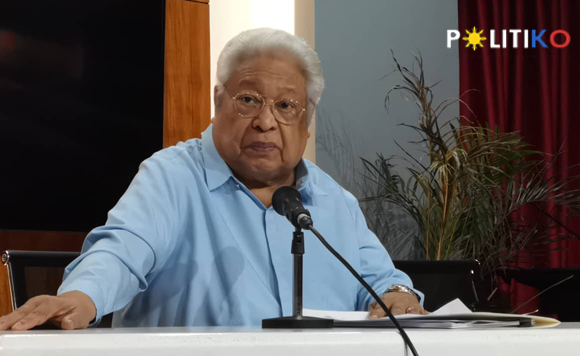 0 170
Share
Want more POLITIKO News? Get the latest newsfeed here. We publish dozens and dozens of politics-only news stories every hour. Click here to get to know more about your politiko - from trivial to crucial. it's our commitment to tell their stories. We follow your favorite POLITIKO like they are rockstars. If you are the politiko, always remember, your side is always our story. Read more. Find out more. Get the latest news here before it spreads on social media. Follow and bookmark this link. https://goo.gl/SvY8Kr

Albay Rep. Edcel Lagman has lauded the third reading approval of the bill that seeks to prohibit the practice of child marriage and imposes penalties for violations thereof.

Lagman said that “child brides will be relics of the past” after the bill moves closer to becoming a law.

Lagman, principal of the bill together with Reps. Bernadette Herrera-Dy, Alfred Vargas, Ma. Lourdes Acosta-Alba, Josephine Lacson-Noel, Joy Myrna S. Tambunting, and Eduardo “Bro. Eddie” C. Villanueva, among many others, said that the United Nations World Population Prospect ranks the Philippines as the 10th country with the highest absolute number of child marriages at 808,000 in 2019.

“The country’s adverse situation is due to the practice of child marriage by Filipino Muslims and indigenous peoples, in addition to co-habitations outside wedlock or illicit live-in unions involving adult men and young girls, which the bill now proscribes”, Lagman added.

According to Lagman, one of the deleterious effects of child marriage is that it vitiates marital consent because either or both the child bride or groom are underage to give valid consent.

He also said that it violates the human rights of children under international conventions and domestic laws.

The practice also exposes the child bride to economic vulnerabilities as she is deprived of completing her education, attaining adequate work skills, and securing remunerative employment.

Lagman also explained that the concept of “child marriage” must be revised to include co-habitations outside of wedlock between children, and between adult men and underage girls because they have the same adverse consequences of child marriages.