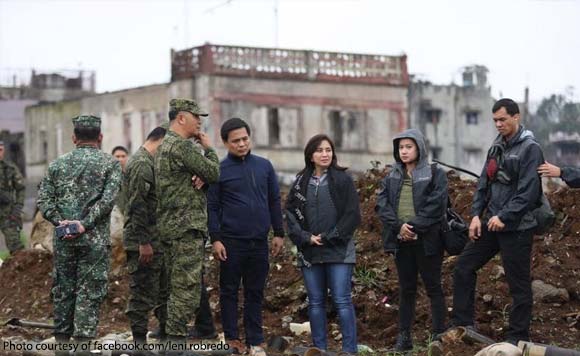 0 353
Share
Want more POLITIKO News? Get the latest newsfeed here. We publish dozens and dozens of politics-only news stories every hour. Click here to get to know more about your politiko - from trivial to crucial. it's our commitment to tell their stories. We follow your favorite POLITIKO like they are rockstars. If you are the politiko, always remember, your side is always our story. Read more. Find out more. Get the latest news here before it spreads on social media. Follow and bookmark this link. https://goo.gl/SvY8Kr

As she winds down her term, Vice President Leni Robredo has started chronicling her final year in her current office.

In a Facebook post, Robredo shared that when she became Vice President, former Health Secretary Alran Bengzon advised her to keep a daily diary.

However, she had not been able to do so.

But as she marked her fifth year as Vice President, she realized that so much has happened.

This inspired her to pull out her diary and start writing about her days.

She hopes to document her last days in office, she said.

She has also started compiling memorable photos from her trips and activities, and these included shots from her visit to ground zero of Marawi City after the 2017 siege.

She recalled being dumbfounded by the damage and being awed by the heroism of the soldiers and the people of the city.

She has much to write about!

“One of the most important pieces of advice that I received when I assumed office came from Former Health Secretary Alran Bengzon. He said I should keep a daily diary everyday that I’m in office. Unfortunately, it was something I was not able to follow through.

Last June 30, 2021, I realized the 5 years that was behind me and how much has happened already. I pulled out my diary which already collected dust in my drawer and started writing again. Hopefully, I will be able to document my last year in office.

To compensate for the lost time, I also started compiling all the memorable pictures that we were able to collect and be able to document all the stories behind those pictures.

Posting here a few ones of my first visit in Ground Zero in Marawi after the war. I remember how dumbfounded we were with the sight of so much devastation. Awed also by the heroism of our soldiers and the people of Marawi. I remember the times I visited our wounded soldiers while the war was still ongoing. Third picture was taken during one of my visits,” Robredo posted.