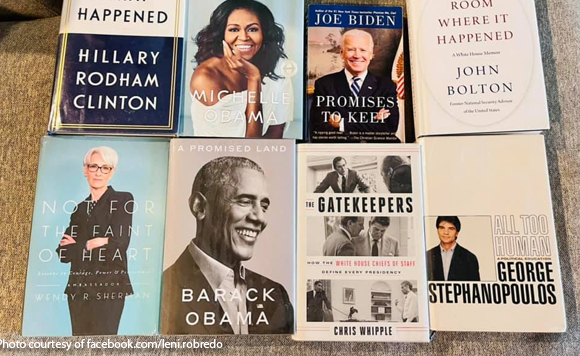 Many people have been asking Vice President Leni Robredo what books she has, and she has shared a glimpse of her reading list.

In a Facebook post, Robredo shared photos of some of her books, which she bought or were gifted to her.

According to Robredo, her taste has changed over the years.

When she was a student, she liked thrillers and espionage and collected the works of James Patterson, Robert Ludlum, John Grisham, Tom Clancy, Ken Follet, Dan Brown, and Patricia Cornwell.

In her late 30s to her mid 40s, her taste leaned toward Gabriel Garcia Marquez, Isabel Allende, and Arundhati Roy.

She then turned to lighter reads when her husband Jesse died.

She will share these books soon when she has more time, she added.

But nowadays, she has been reading non-fiction, including the books of Barack Obama, Michelle Obama, Hillary Clinton, and Joe Biden.

“Been asked many times what books I have. I have been promising to post but I have to do it in several installments because my books are all over. I do not have the space to keep them all in one place, which is really my dream.

My taste has evolved over the years. All throughout high school, college, and law school, I was so into thrillers, espionage, and I have a room full of James Patterson, Robert Ludlum, John Grisham, Tom Clancy, Ken Follet, Dan Brown, Patricia Cornwell.

When I was in my late 30s until my mid 40s, I was into Gabriel Garcia Marquez, Isabel Allende, Arundhati Roy. After Jesse died, I gravitated towards lighter reads. (Will do a separate post on this when I have time in Naga😊). I am more into non-fiction now.

Posting a few photos of what I have with me now, here at home. Some, I received as gifts. The others I bought. I will not include yet my Filipiniana books and those I have in the office. That will be in another post.

This is part one,” Robredo posted.