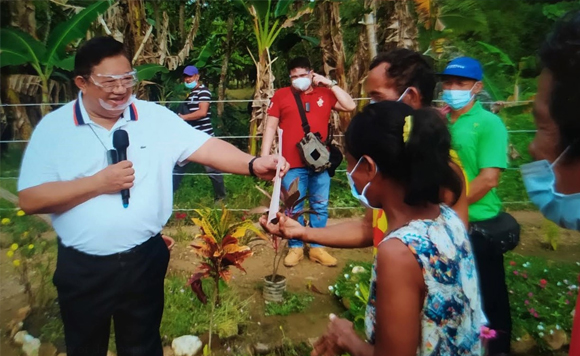 0 103
Share
Want more POLITIKO News? Get the latest newsfeed here. We publish dozens and dozens of politics-only news stories every hour. Click here to get to know more about your politiko - from trivial to crucial. it's our commitment to tell their stories. We follow your favorite POLITIKO like they are rockstars. If you are the politiko, always remember, your side is always our story. Read more. Find out more. Get the latest news here before it spreads on social media. Follow and bookmark this link. https://goo.gl/SvY8Kr

The said distribution was part of tpersonalized Serbisyong DAR-to-Door program of the Department of Agrarian Reform.

According to the department, the Serbisyong DAR-to-Door is a program of the DAR where the secretary personally delivers the certificates of land ownership award (CLOAs) right at the farm or at the doorsteps of the recipients.

Castriciones said they do this service to bring the government to farmers’ household so that they would feel that this administration is on their side.

“We visit various far-flung communities to give hope to the farmers. To show them that if we can personally deliver the land titles they’ve been dreaming of for many years, we can do more to make their lands become more productive,” Brother John said.

The Secretary was joined by other DAR top officials from central, regional, and provincial offices to show their full support to this program.