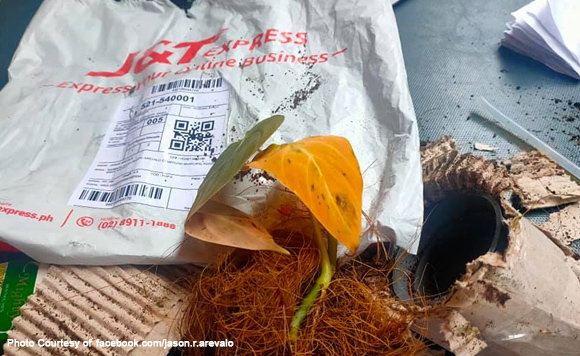 0 21
Share
Want more POLITIKO News? Get the latest newsfeed here. We publish dozens and dozens of politics-only news stories every hour. Click here to get to know more about your politiko - from trivial to crucial. it's our commitment to tell their stories. We follow your favorite POLITIKO like they are rockstars. If you are the politiko, always remember, your side is always our story. Read more. Find out more. Get the latest news here before it spreads on social media. Follow and bookmark this link. https://goo.gl/SvY8Kr

There’s nothing express about the service of J&T Express.

Masbate Board Member Jason Arevalo found this out the hard way when a plant he ordered as a Christmas gift for his mom was delivered very late, way past the holidays.

His order, a melanoni philo, was shipped on December 20.

But it didn’t make it to Christmas, or even New Year or Three Kings.

The plant was delivered after 20 days, when the excitement has died, and so has the plant, he lamented.

He noted that the parcel has been in the province since December 29 but was only delivered to him 13 days later.

If the package had contained medicine for a critical patient, the patient would have likely been buried six feet under by the time the medicine arrived, he said.

It’s all talk, no express!

Thank you, J&T Express. And it seems the word “express” in your name is a huge mistake. Ordered online a melanoni philo as a Christmas gift for Mama. T’was shipped on 20 December. Christmas is past. New year’s day, too. Then came Happy Three Kings. The holiday is over. And after six followups, the plant is here. Yeah, after 20 days of waiting. The excitement is dead. And so is the plant.

And what’s disconcerting, the parcel has been here since December 29. And J&T made the delivery on 10 January, still some 13 days later.

I wonder if the parcel is for the medicine of a critical patient. With this kind of service you’re giving us, the patient would be six feet under when his life-saving medicine arrives.

To J&T Express, thanks but no thanks! Masbatenos deserve better…,” Arevalo posted.

Thank you, J&T Express. And it seems the word “express” in your name is a huge mistake. Ordered…