You’re the light! Iriga Mayor Madel Alfelor thanks Muntinlupa officials, other donors for sending aid to the city 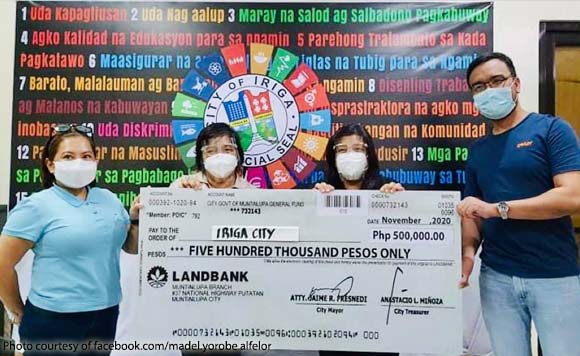 Iriga City was not alone in its efforts to recover from the recent typhoons.

Muntinlupa came to its aid and provided light during the dark times, Mayor Madel Alfelor said.

In a Facebook post, Alfelor expressed her appreciation for Muntinlupa Mayor Jaime Fresnedi, the Muntinlupa City Council, and the people of the city for providing P500,000 to Iriga.

The amount would go a long way in helping the people, she said.

She also thanked the others who came to Iriga’s aid, including Vice President Leni, Interior and Local Government Undersecretary Jonathan Malaya, the Kaya Natin Foundation, and SM.

She did not expect that there were people who could be so kind-hearted, generous, and passionate in helping those in need, she said.

They have her eternal gratitude!

“AT THE END OF THE TUNNEL YOU CAN SEE A LIGHt, never expected that there are people with kind heart, generous and full of passion to help people who are in need…