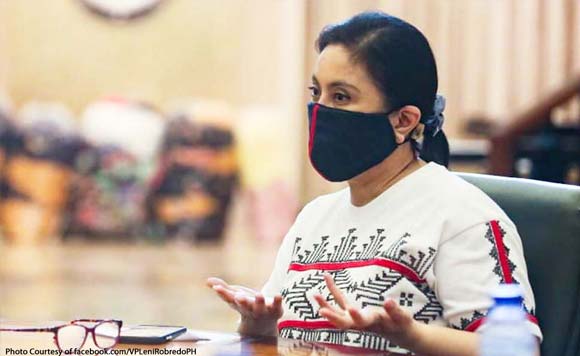 Vice President Leni Robredo kept an eye on the Bicol region as typhoon Ulysses raged, and called for help for trapped residents in Ragay, Camarines Sur.

In a Facebook post, Robredo said she received reports of residents trapped in Panaytayan and Amomokpok in Ragay, where flood waters had become deep.

She said she requested the 9th Infantry Division of the Philippine army to send vehicles that could withstand the raging waters, and it assured her that it would act on the matter.

But she was informed that the rescue vehicles were having a difficult time reaching the area because the Maharlika Highway was impassable.

She asked them if there were other ways of reaching the trapped residents.

The VP’s on alert!

“We have received reports of residents trapped in their houses in Panaytayan and Amomokpok in Ragay, Camarines Sur. Apparently, flood waters are already very deep.

We requested the 9ID of the Philippine Army if they can send over to these locations vehicles which can withstand the raging waters.

We were assured they will swiftly act on it. Nag cocoordinate na po sinda sa 9B na naka station sa may Ragay.

We were just informed that rescue vehicles are having a difficult time reaching the area because Maharlika Highway is not passable now sa Sipocot area. We are requesting if they can look for other means to get to the trapped residents,” Robredo posted.