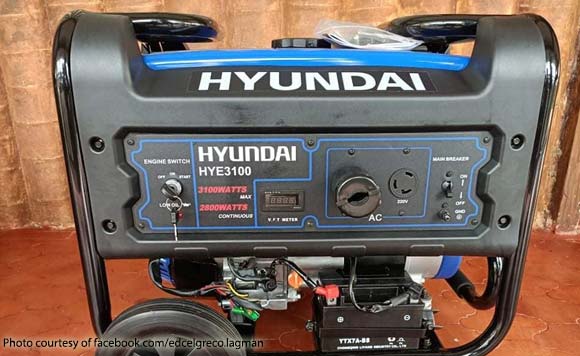 Albay lost power during the onslaught of typhoon Rolly, and Albay Vice Gov. Grex Lagman is helping residents cope by deploying generator sets around the province.

In a Facebook post, Lagman said the generator sets are used for a free charging program for those who need to power up their flashlights, radios, cellphones, power banks, and the like.

Some even use the generator sets for nebulizers to treat respiratory ailments, or to charge laptops and tablets for their studies, he said.

He said he recently bought a new generator set, an electric panel with 35 outlets and five gallons of gasoline using money donated by friends.

He added this to the five generator sets he has.

He also called for donations to support his free charging program.

Those who want to send cash could deposit it to a bank account, he said.

Reports say electricity in Albay could take a month to be restored, so the situation was not expected to return to the normal soon, he noted.

More power to this project!

“On 3 November 2020, a friend and batchmate from high school and college (Anna Sanares-Brissett) and law school (Edwin Aguirre) donated money which i used to buy a generator set, an electric panel with 35 outlets and five (5) gallons of gasoline. This gen set will be used in San Francisco, Guinobatan for my province-wide ‘Free Charging Program’. It will be operated by my Guinobatan coordinator Kagawad Wilbert Palencia. Thanks very much Anna and Edwin for your kindness and generosity! 🙏❤️

Many of my constituents in the province have called, texted, PMed and emailed me asking if gen sets can be loaned to them for free. These gen sets will be used to charge rechargeable appliances like flashlights, radios, cellular phones, electric fans, power banks, etcetera. Some even use the free electricity to cook rice in their rice cookers and treat relatives who need nebulization for respiratory ailments using their nebulizers. Some students also plug in their laptops and tablets that they will later on use for their studies. 🙏❤️

At present, I only have five (5) gen sets. So this additional donated gen set will be a big help. Power in Albay is not expected to normalize soon even as reports are consistent that it will take over a month for power to be fully restored.

So, please donate any amount to my free charging program. Every red cent counts! ❤️ For cash donations, here are the details:

I will accordingly acknowledge your help! ❤️,” Lagman posted.