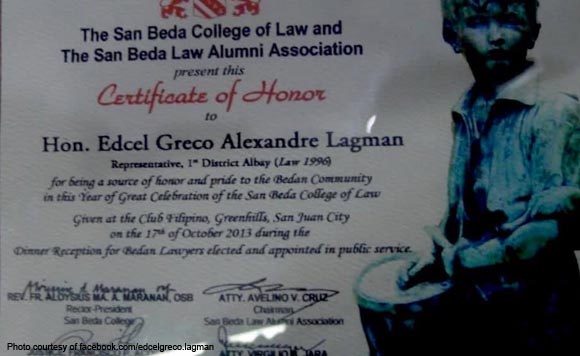 Albay Vice Gov. Grex Lagman happily accepted his certificate of honor from the San Beda College of Law even though he completed his law degree at another school.

In a Facebook post, Lagman recalled how the late former Ambassador Roy Señeres paved the way for him to be recognized as an outstanding alumnus of the San Beda law school.

Lagman graduated from the Arellano University School of Law, but Señeres pointed out to him that he also studied at San Beda Alabang from pre-school to high school, and spent three years at San Beda law.

Señeres told him that he more than met the requirements of being a Bedista, and this convinced him to accept the honor from San Beda law.

Lagman said he considers Señeres a friend and saw how beloved he was by friends, family and the San Beda Law community.

“In 2013, the late former ambassador and Rep. Roy Señeres (who happened to be my colleague in the 16th Congress), struck me as a San Beda Law fanatic. He scoured all the members of that Congress and checked if they had ties with his law school. When he verified that i spent three years in his law school, he endorsed me to the then Dean of San Beda College of Law, Atty. Virgilio Jara, so that i can be installed as an outstanding alumnus of SBC Law.

I relented because i graduated in AUSL which i naturally and rightfully consider as my law school alma mater. But being the sleuth that he was, he also reminded me that i studied in San Beda-Alabang from pre-school to high school. His well-known sense of humor also came to fore when he told me: ‘sa totoo lang, sobra sobra pa nga ang pagiging Bedista mo.’ That made me say ‘yes’ and eventually accepted the honor SBC Law, through his endorsement, offered to so graciously give me.

Roy Señeres was a colorful public servant. He came to prominence in the early 90s when he took the diplomatic cudgels for Sarah Balabagan, an OFW icon. In 2016, he ran for President, albeit half-heartedly, and passed away before election day. More importantly, he was a friend. I attended his wake and there i saw how beloved he was by his friends and family and, of course, by the San Beda Law community,” Lagman posted.

In 2013, the late former ambassador and Rep. Roy Señeres (who happened to be my colleague in the 16th Congress), struck…

Governance is not just about giving handouts, says Albay…