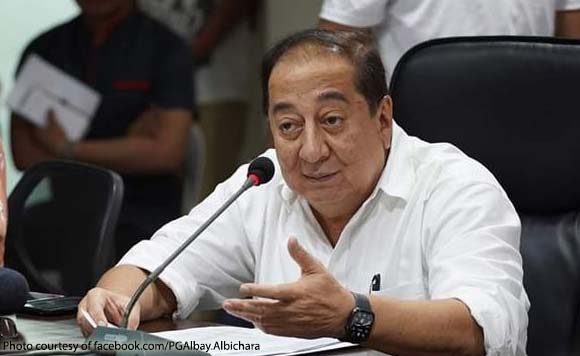 The governor of Albay on Friday issued an advisory alerting residents on the possible effects of Tropical Depression Quinta that is forecast to hit the province and other parts of the Bicol Region in the coming days.

Gov. Al Francis Bichara issued Advisory No. 1 banning the sailing of fishing vessels, and telling Albayanos to closely monitor the weather updates to be sent through text messaging and the local broadcast media.

Ariel Samudio, Legazpi City-based weather forecaster of the Philippine Atmospheric, Geophysical and Astronomical Services Administration (PAGASA) said that it is too early to tell what place in Bicol will be hit by the eye of TD Quinta.

Cedric Daep, head of the Albay Public Safety and Emergency Management Office (Apsemo), said that they are anticipating three scenarios should the weather disturbance hit Albay—floods, landslides, and lahar or mudflow from Mayon Volcano.

Daep said they would likely order on Sunday afternoon the pre-emptive evacuation of residents in areas prone to flooding, landslides, and lahar flow.

“Should the weather condition worsen, we will also order the suspension of online classes and submission and pick up of modules in schools across Albay,” he said.

Residents at the slope and near Mayon Volcano are advised to be vigilant against lahar flows and to get ready to evacuate should the weather condition deteriorate, Daep added. (PNA)