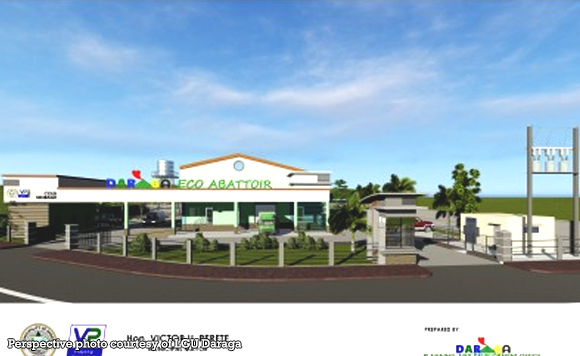 DARAGA, Albay – Mayor Victor Perete on Monday said the construction of a modern slaughterhouse worth PHP60 million will start soon after the Department of Agriculture (DA) in Bicol, through the National Meat Inspection Service (NMIS), gave the green light for the project.

The project was initiated by Albay 2nd district Rep. Joey Salceda to be funded under the Philippine Rural Development Program (PRDP), a poverty-reduction program that aims to increase rural incomes and enhance farm productivity in the countryside.

PRDP presents opportunities and strategies for the efficient and integrated delivery of devolved agriculture and fishery services and improving local government units’ (LGU) resource management including governance systems and mechanism.

Perete, in an interview, said the construction of the Double A slaughterhouse in Barangay de la Paz here is the result of a partnership between the municipal government of Daraga and DA. Of the project funds, PHP50 million is a full grant from the DA while the PHP10 million is the counterpart of the LGU.

“It is certainly for the best interest of the municipality to be able to operate a government-owned slaughterhouse and mobilize the support of the proper agencies of government for the former’s initiative to include those on infrastructure and enterprise development and related programs,” Perete said.

He noted that slaughterhouses provide important economic benefits to stakeholders in the livestock’s value chain.

They generate employment to family labor, either part-time or full-time depending on scale of the slaughterhouse operation, thus providing livelihood opportunities and increase local government revenues, according to the mayor.

He said the LGU wants to fast track the construction of the modern slaughterhouse in order to prevent unauthorized and illicit slaughtering.

The only slaughterhouse currently operating in Daraga is located in Barangay Kilicao, operated by Grupong Magkakarne. However, it was ordered closed last February 24 upon the recommendation of the municipal market administrator and sanitary inspector due to several violations of Presidential Decree No. 856, the Sanitation Code of the Philippines.

Themes Lobete, market administrator, said the need to construct a new slaughterhouse in needed because of the increasing demand for meat.

“The monthly average of slaughtered animals is 2,310 heads in the old privately operated slaughterhouse,” he said.

As of August 2020, the total population of swine in this town was 7,574, both crossbreeds and native, and it is expected to increase by 2021. “The ultimate impact of operating the slaughterhouse is to generate local revenue, create employment, low price of meat products, and reduce transportation cost of meat products,” Lobete said.

The abattoir project is expected to be completed in the first quarter of 2021.

The initial documentary requirements have been submitted by the Municipal Project Implementation Unit to the DA – NMIS in Bicol. (PNA)