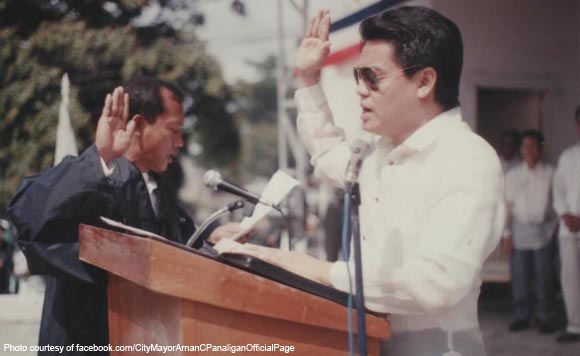 Calapan City Mayor Arnan Panaligan has recalled the day he first forayed into the world of politics 25 years ago today.

“25 years ago today, on June 30, 1995, my political career officially began when I took the oath of office as Mayor of the then municipality of Calapan,”said Panaligan.

“Three years later, on June 30, 1998, I took the oath as the first elected City Mayor of the newly created City of Calapan,” he added.

When Calapan was turned into a city, Panaligan obtained the moniker “the City Builder.”

He ended his term as Mayor in 2004 and ran and won as Vice Governor and subsequently became Governor.

“I finished my third term as City Mayor in 2004 and took subsequent oaths as Vice Governor and Governor of the Province of Oriental Mindoro. On June 30, 2013, I again took the oath as City Mayor of Calapan and went on to be re-elected for a second and third mayoral terms,” Panaligan recalled.

“God willing, I will be serving a total of 18 years as City Mayor of Calapan out of the 25 years of my political life. I thank the people of the City of Calapan for the trust and confidence that they have reposed in me for the past 25 years,” he added.

Panaligan also expressed his gratitude to all his supporters and all those who continue to believe in him “even if there are times when I may have failed to meet their expectations, my confidants, friends and family and all well meaning people of goodwill who pray for me.”

Panaligan also said it was a “privilege” to have presided over the affairs of this city, from its transition as a sleepy town to a booming city.

“To help found a city, steer its growth and play a role in its development is truly a rare honor that I will always treasure. My 25 years in politics have been marked by triumphs and setbacks and by success and disappointments. I have received an outpouring of adulations and praise as well as a considerable measure of criticisms. But in the words of St. Paul, I have always fought the good fight, I have always run in the race and I have kept the faith.” he said.

“As I mark my 25 years in politics, I pray that God will continue to guide me in my governance and public service especially now that our city and country navigate perilous seas brought about by the unprecedented crisis that we face today. I pray that I will continue to be accorded with the opportunity to serve the country and make a difference in the lives of the Filipino people. As to what the trajectory of my political life will be in the future, I leave that to the vagaries of destiny,” Panaligan concluded.