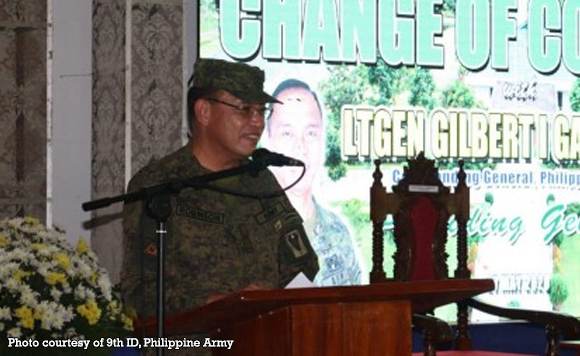 “In his retirement speech, Maj. Gen. Trinidad recognized the dedicated workforce of the Spear Division, saying that if not for them, he will not be retiring as an accomplished military officer,” he said.

Belleza added that Gapay thanked Trinidad for his remarkable contribution in advancing the region’s peace and development efforts.

“He expressed his confidence to the new Commander of 9ID with the hope that the Division will continue to thrive with its vision towards a world-class army that is a source of national pride while securing and attaining a peaceful and progressive Bicolandia,” he said.

Gapay also gave guidance to Robinson on supporting the Army’s momentum in capacitating its field and combat units toward delivering effective assistance to the communities in the fight against the coronavirus disease 2019 (Covid-19).

Prior to the turnover ceremony, the 9ID conducted demilitarization of the captured, confiscated, surrendered, and recovered (CCSR) firearms from February 15, 2018 to May 7, 2020. The activity aimed to ensure that all CCSR firearms are destroyed to avoid pilferage, resale or being used in illegal activities.

A road roller from the 565th Engineering Construction Battalion ran over the 59 weapons.

Trinidad said the volume of CCSR firearms only proves that the Army in Bicol is winning the fight against insurgency.

“With the new division commander, the Spear Division is sturdy and ready to soar higher in resolving the armed conflict in Bicolandia while delivering excellent military service to the Bicolanos,” he added. (PNA)