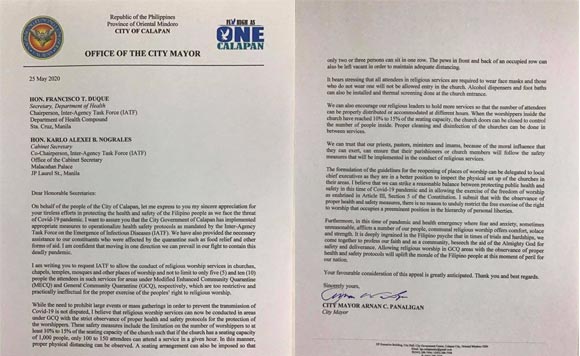 Calapan Mayor Arnan Panaligan has listened to the plea of the fateful in his city.

Panaligan has written to the Inter-Agency Task Force for the Management of Emerging Infectious Diseases and to the Department of Health to allow his city to reopen churches and resume worship services.

He told officials these could be conducted subject to health and safety standards, he said on his Facebook.

He hoped the officials would listen to his plea, for the sake of the spiritual health of his constituents.

It is well-engrained in Filipino culture to pray and worship as a group, especially in times of crisis.

They need derive strength and hope from this, he added.

Will the IATF answer their prayers?

“Letter of appeal to IATF to allow the reopening of churches and resumption of worship services subject to observance of proper health safety standards submitted by City Mayor Arnan C. Panaligan to Secretary Francisco Duque of the Deparment of Health and Cabinet Secretary Karlo Alexei Nograles, chairperson and co-chairperson, respectively of IATF