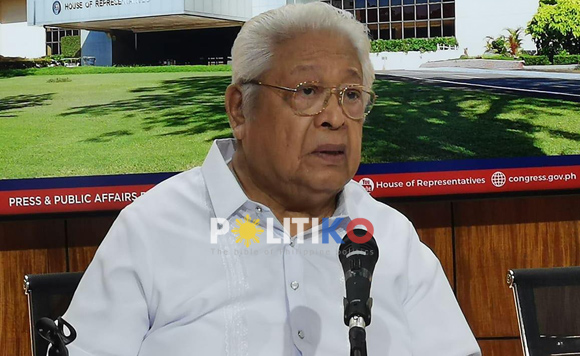 0 741
Share
Want more POLITIKO News? Get the latest newsfeed here. We publish dozens and dozens of politics-only news stories every hour. Click here to get to know more about your politiko - from trivial to crucial. it's our commitment to tell their stories. We follow your favorite POLITIKO like they are rockstars. If you are the politiko, always remember, your side is always our story. Read more. Find out more. Get the latest news here before it spreads on social media. Follow and bookmark this link. https://goo.gl/SvY8Kr

Albay Rep. Edcel Lagman on Wednesday expressed his appreciation for the House leadership’s decision to begin formal deliberations on the franchise of ABS-CBN on March 10, instead of in May as it previously announced.

“On behalf of the numerous advocates for press freedom in the House of Representatives, I truly appreciate the decision of Speaker Alan Peter Cayetano to start on March 10, 2020 the consideration of the 11 bills proposing the extension for another 25 years of the legislative franchise of ABS-CBN,” he said.

The opposition congressman said he hoped the decision “will advance the belated timetable previously announced by Speaker Cayetano which would unduly delay the consideration and approval of the imperiled franchise.”

“I hope that the hearings on the franchise of ABS-CBN will not be extended past the 2022 presidential and general elections as previously intimated by Cayetano,” Lagman said.

Cayetano has denied suggesting the discussions on ABS-CBN’s franchise might go past the May 2022 polls.

Speaking to reporters in his office, Cayetano announced: “The committee on legislative franchises released a notice today that on March 10, 2020, in the Belmonte Hall, South Wing Annex, we will be taking up the 11 bills concerning the ABS-CBN Corp. renewal of franchise.”

The House will adjourn on March 11, while ABS-CBN’s franchise will lapse on May 4, which is also the day Congress resumes its sessions.