Legacion discusses plans vs ASF with officials of neighboring towns 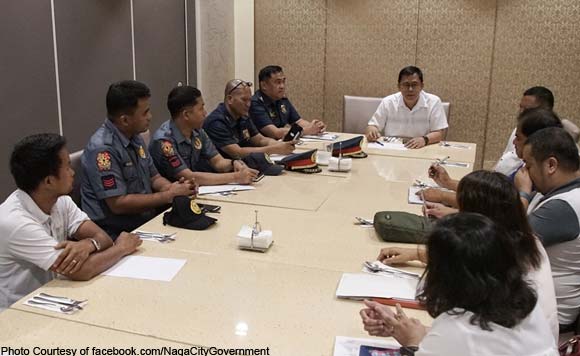 0 836
Share
Want more POLITIKO News? Get the latest newsfeed here. We publish dozens and dozens of politics-only news stories every hour. Click here to get to know more about your politiko - from trivial to crucial. it's our commitment to tell their stories. We follow your favorite POLITIKO like they are rockstars. If you are the politiko, always remember, your side is always our story. Read more. Find out more. Get the latest news here before it spreads on social media. Follow and bookmark this link. https://goo.gl/SvY8Kr

Naga City Mayor Nelson Legacion has conducted the meeting with the local executive chiefs and officials of neighboring towns to tackle the African Swine Fever.

The meeting aims to reinforce measures to prevent the dreaded disease from spilling over from towns to towns.

The meeting sought to discuss and garner cooperation with LGU Naga’s move to “temporarily prohibit the entry of live hogs and pork products in the city as directed by the authorities.”

Legacion also recently met with the the bus owners in the city to discuss the measures to be undertaken against African Swine Fever.

Legacion tackled the penalties and the stricter implementation on transport of live animals and meat products.

“Coordinating with local agencies tasked in preventing the entry of ASF virus in the city, Mayor Nelson Legacion convened bus owners to discuss with them the LGU’s move to enforce stricter implementation of preventive protocol regarding the transport of live animals or any kind of meat products,” the city government said.

“Corresponding penalties will be imposed for any offense committed in adherence to the protocol,” it added