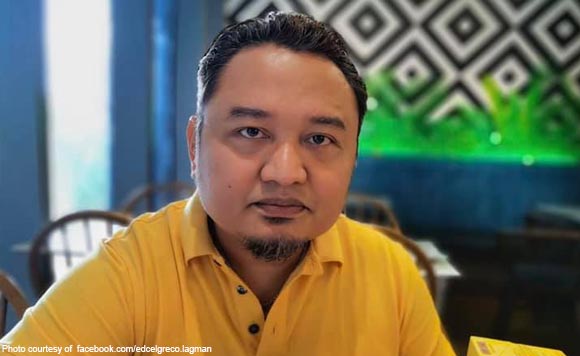 0 587
Share
Want more POLITIKO News? Get the latest newsfeed here. We publish dozens and dozens of politics-only news stories every hour. Click here to get to know more about your politiko - from trivial to crucial. it's our commitment to tell their stories. We follow your favorite POLITIKO like they are rockstars. If you are the politiko, always remember, your side is always our story. Read more. Find out more. Get the latest news here before it spreads on social media. Follow and bookmark this link. https://goo.gl/SvY8Kr

Perhaps for Albay Vice Gov. Grex Lagman, being called dilawan is no insult.

Lagman always associated the color yellow with courage, he said in a Facebook post as he commemorated the 34th anniversary of the EDSA revolution.

He was only 13 when Filipinos rose up to oust a dictator, but he knew enough having grown up during martial law.

He saw the abuses under the Marcos regime. An uncle became a desaparecido, and an aunt was gunned down.

He saw how important basic freedoms are especially when they are being repressed, he said.

But 34 years after the revolution, much remains to be done, he said, as he noted that the abuses Filipinos fought have returned.

He hopes the country has not wasted all its efforts to gain the freedom it now enjoys.

On a more serious note, just want to share that at 13 years of age, i bore witness to the first ever bloodless revolution that ousted a dictator-plunderer. Being a martial law baby and growing up in the late 70s and early 80s, i saw how important basic freedoms are—-especially when they were repressed.

A labor leader-lawyer uncle, Hermon C. Lagman, became a desaparecido in 1977. An aunt (uncle Ka Popoy’s wife auntie Sally Garduce) was gunned down by the military in the early 80s. These were enduring themes as i tried my best to understand what they meant and hoped to convey.

34 years hence, there is so much more to be improved on. Especially in the last couple of years when we entered a redux of what we all wanted to prevent.