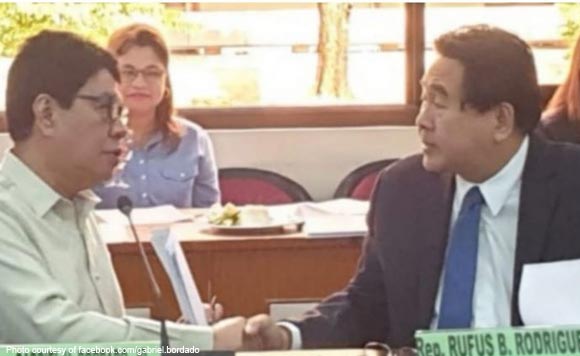 0 369
Share
Want more POLITIKO News? Get the latest newsfeed here. We publish dozens and dozens of politics-only news stories every hour. Click here to get to know more about your politiko - from trivial to crucial. it's our commitment to tell their stories. We follow your favorite POLITIKO like they are rockstars. If you are the politiko, always remember, your side is always our story. Read more. Find out more. Get the latest news here before it spreads on social media. Follow and bookmark this link. https://goo.gl/SvY8Kr

Camarines Sur Rep. Gabriel Bordado Jr. is relieved that his proposal to put up a Technical Education and Skills Development Authority training center in Calabanga has passed the first hurdle.

But this came after he argued with the TESDA representative about the need to build the center in Calabanga, he said.

Thankfully, the House Committee on Higher Education was also convinced by his arguments.

Now he just has to convince the entire House of Representatives plenary to back his measure!

“TESDA-CALABANGA APPROVED AT THE HOUSE COMMITTEE LEVEL: After arguing with the representative of the Technical Education and Skills Development Authority (TESDA), I managed to convince the Committee on Higher Education of the need to establish the TESDA TRAINING AND ACCREDITATION CENTER in Calabanga. I thanked REP. RUFUS RODRIGUEZ of Cagayan de Oro for moving for the approval of my bill, HB 5750,” Bordado posted.