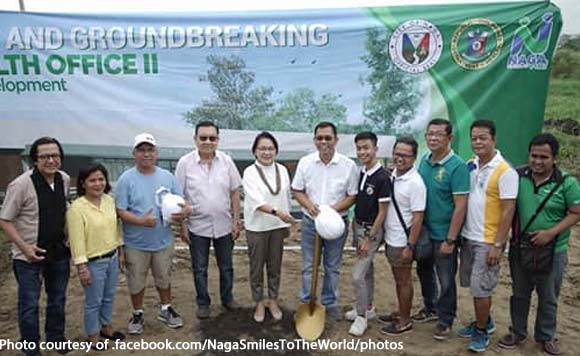 0 554
Share
Want more POLITIKO News? Get the latest newsfeed here. We publish dozens and dozens of politics-only news stories every hour. Click here to get to know more about your politiko - from trivial to crucial. it's our commitment to tell their stories. We follow your favorite POLITIKO like they are rockstars. If you are the politiko, always remember, your side is always our story. Read more. Find out more. Get the latest news here before it spreads on social media. Follow and bookmark this link. https://goo.gl/SvY8Kr

The top leaders of Naga City have led the groundbreaking of the new health office today.

“We’re at the height of development! Early this morning, Mayor Nelson Legacion, in full force together with the Sangguniang Panlungsod headed by Vice-Mayor Cecilia Veluz De Asis, led the Earth Moving and Groundbreaking Ceremony of the new Naga City Health Office II at the Sta. Cruz New Area Development,” the city government said.

For its very first meeting, theu discussed “crucial topics” such as exploring future partnerhips and linkages, upcoming activities, damage assessment of the Typhoon Tisoy and four additional planting sites, among others.

CFOM’s Executive Committee are comprised of representatives from several public and private organizations within the city who are eager to join Naga’s ‘greener’ cause” said the city government.