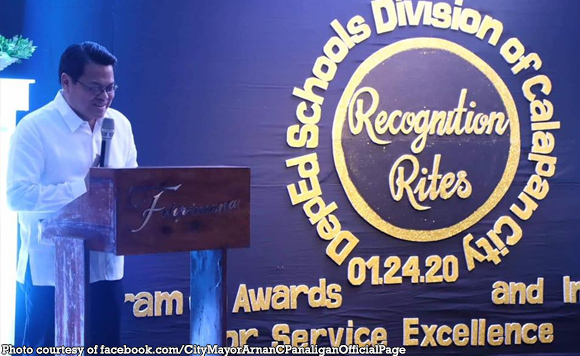 0 699
Share
Want more POLITIKO News? Get the latest newsfeed here. We publish dozens and dozens of politics-only news stories every hour. Click here to get to know more about your politiko - from trivial to crucial. it's our commitment to tell their stories. We follow your favorite POLITIKO like they are rockstars. If you are the politiko, always remember, your side is always our story. Read more. Find out more. Get the latest news here before it spreads on social media. Follow and bookmark this link. https://goo.gl/SvY8Kr

Calapan City Mayor Arnan C. Panaligan has addressed the officials and public school teachers of the City Schools Division during the Recognition Rites for retirees and school teachers in the active service for excellence.

In his speech, Mayor Panaligan laude the teachers for their indispensable role in “moulding the character and minds of the Filipino youth.”

Panaligan said that leading the youth into the right path is their paramount contribution in building a strong nation.

The mayor likewise stressed the need to invest in quality education to prepare the youth to become competitive and better citizens of the country.

“Mayor Panaligan noted that while education is a national government function exercised through the Department of Education, it is very much a local government concern as the youth that DepEd trains are the constituents of the local governments who will play vital roles in the development of vibrant and dynamic local communities,” Panaligan’s office said.

Mayor Panaligan also highlighted the need for the national and local governments to collaborate in improving the quality of education in the country.