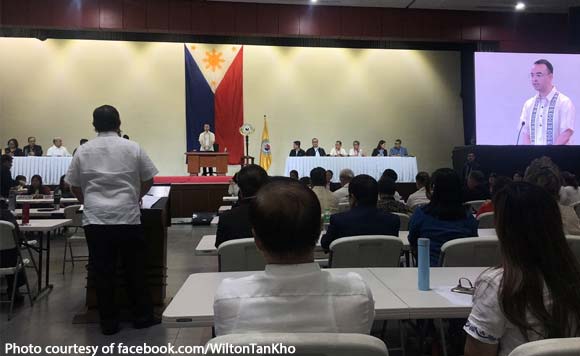 0 502
Share
Want more POLITIKO News? Get the latest newsfeed here. We publish dozens and dozens of politics-only news stories every hour. Click here to get to know more about your politiko - from trivial to crucial. it's our commitment to tell their stories. We follow your favorite POLITIKO like they are rockstars. If you are the politiko, always remember, your side is always our story. Read more. Find out more. Get the latest news here before it spreads on social media. Follow and bookmark this link. https://goo.gl/SvY8Kr

Masbate Rep. Wilton Kho has joined the session of the House of Representatives in Batangas province.

Lawmakers held their session yesterday in Batangas amid the eruption of Taal Volcano, which affected thousands of residents in the province and nearby areas.

“Amidst imminent eruption, we the members of the 18th congress decided to hold our regular session in Batangas City to show solidarity amongst the evacuees of Laguna, Cavite, Batangas,” said Rep. Kho.

Kho said that by bringing the House to Batangas, they were able to listen closely to the needs of the affected residents.

“In addition, we took advantage of this rare opportunity to listen to the first responders, and to those directly affected by the calamity in order to craft laws that are responsive to the needs of the victims,” Kho said.

“I am proud to be a part of this historic moment, for this is the first time that the session was held outside the plenary hall of the House of Representatives, Quezon City,” he added.